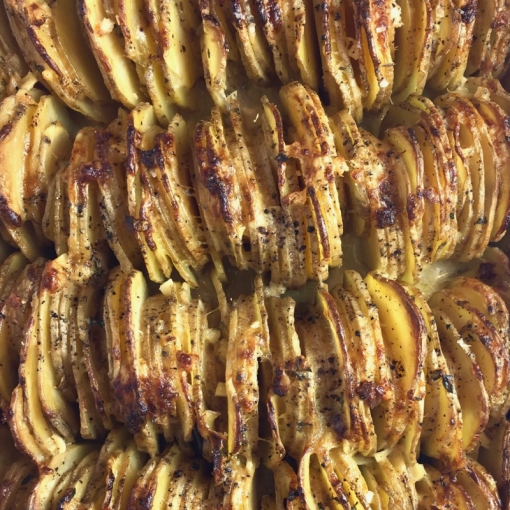 This dish was part of our Thanksgiving feast as a second potato dish to compliment my son’s mashed potatoes. (He almost exclusively eats potatoes on Thanksgiving Day!)

This recipe was adapted from The New York Times, contributed by J. Kenji López-Alt, from his book titled “The Food Lab.” I substituted unpeeled Yukon Gold potatoes for the peeled russet potatoes and added extra garlic and cheese. 😉 I actually added the cheese at the wrong time (oops!) and was thankfully still quite pleased with the results. 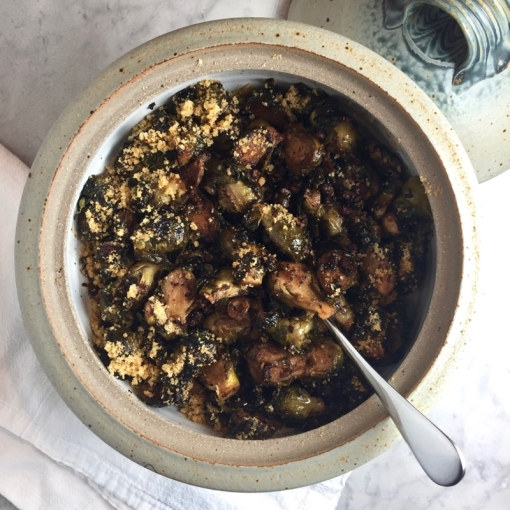 Brussels sprouts are an essential part of my Thanksgiving weekend menu because my mom and mother-in-law are here to gobble them up with me. 🙂 In this dish, they are sweetened- and darkened- with balsamic vinegar.

This recipe was adapted from The New York Times, contributed by Amanda Hesser. I significantly reduced the amount of breadcrumb topping. It was a nice side dish to serve on Thanksgiving because it comes together quickly and requires minimal oven time.

In addition to serving the Voltaggio brother’s cornbread stuffing last Thanksgiving, I also served this savory-sweet roasted carrot dish from Bryan Voltaggio’s cookbook. I loved that the sauce incorporated the carrot greens and that additional greens were used as a garnish.

The recipe was adapted from Home: Recipes to Cook With Family and Friends by Bryan Voltaggio. I used rainbow carrots and modified the proportions in the sauce. I also found the sauce too coarse to pass through a fine mesh sieve. (I often skip that step anyway!) 😉 It is interesting that his technique is to cut the carrots into bite-sized pieces after they are cooked.

For the Roasted Carrots:

For the Chimichurri Sauce:

To Roast the Carrots:

To Make the Chimichurri Sauce:

To Finish the Dish: 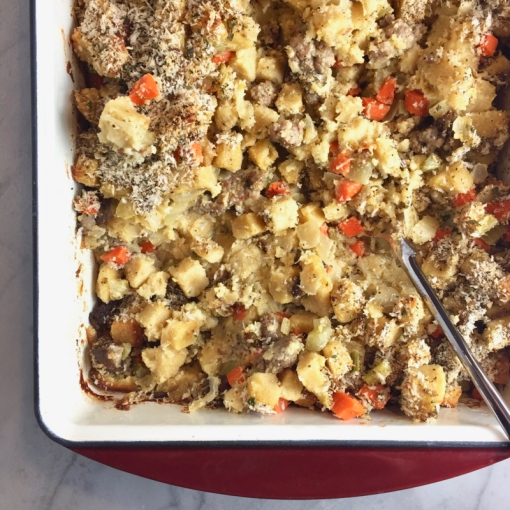 My husband and I traditionally celebrate our wedding anniversary by having an extravagant dinner at VOLT in Frederick, Maryland. It is the restaurant of Bryan Voltaggio, of Top Chef fame. On our 19th anniversary, we brought home an autographed cookbook after enjoying our lovely meal. Last Thanksgiving, I made two side dishes from this special book. ❤

This stuffing recipe was adapted from Home: Recipes to Cook With Family and Friends by Bryan Voltaggio. I modified the proportions and used prepared stock as well as store-bought sausage as shortcuts.

Both the cornbread and the poultry seasoning can be made days in advance, which is always helpful. It was interesting to me that the cornbread was made without a leavening agent, making it more dense than a typical cornbread. The stuffing had a deep celery flavor from the celery seed and chopped celery. Nice.

For the Poultry Seasoning:

To Make the Cornbread:

To Make the Poultry Seasoning:

To Make the Topping:

To Make the Stuffing:

Note: When blending hot liquids, first let cool for 5 minutes or so, then transfer to a blender, filling only halfway. Put the lid on, leaving one corner open; this will prevent the vacuum effect that creates heat explosions. Cover the lid with a kitchen towel to catch splatters and pulse until smooth.

I have been waiting almost a year to share my 2018 Thanksgiving recipes. 🙂

These mashed potatoes were so delicious, my son is planning to make them himself this year as his contribution to the feast. (…and to ensure that they make it back on the menu!) He has also requested scalloped potatoes.

This recipe was adapted from Bon Appétit, contributed by Chris Morocco. I prepared the potatoes in advance, earlier in the day, and kept them warm in a slow-cooker until the rest of the meal was ready to be served.

The beauty of this recipe is that the potatoes can be made up to TWO days before Thanksgiving. The finished dish can be gently reheated with just a little more dairy. The science behind this is that because the butterfat coats the potato starches, it prevents them from becoming sticky or gummy. If you are apprehensive to make this dish so far in advance, the potatoes can be prepared through step 6 (riced) and the remaining steps can be completed just prior to serving.

Do Ahead: Potatoes can be made 2 days ahead. Let cool; cover and chill. To serve, transfer potatoes to a pot and add 1/3 cup heavy cream and 1/3 cup whole milk; reheat over medium-low, stirring often to prevent scorching. 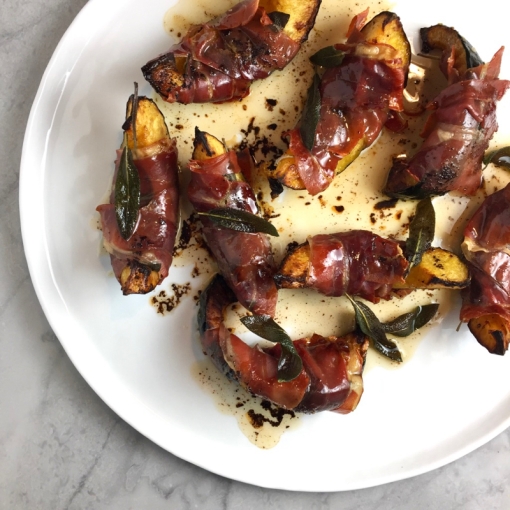 I almost exclusively roast the acorn squash that I receive in my CSA box. It’s a gold-standard crowd-pleaser. 🙂

After making and absolutely loving both a classic and a summer version of chicken saltimbocca, I was excited to try this unique acorn squash version. Unlike the chicken versions, the squash is roasted instead of fried. After roasting, the skin was tender and completely edible. The browned butter sauce made it amazing- especially because it incorporated sherry vinegar.

This recipe was adapted from Food and Wine, contributed by Ann Taylor Pittman. I reduced the amount of browned butter (and there was plenty!). I served it with roasted CSA beets, kohlrabi and potatoes along with a green salad. It was a sweet and buttery CSA feast.

I served it as a main dish but it could also be served as a seasonal side.

This is a great dish to make with wonderful September tomatoes. I used a blend of my CSA tomatoes with grape as well as Campari tomatoes. It may possibly be my daughter’s (and even my husband’s!) dream salad- loaded with tomatoes, cucumbers, sourdough and fried cheese?!?! It was well received. 🙂

The recipe was inspired by a Greek horiatiki salad and is also similar to an Italian panzanella. Incorporating halloumi cheese makes it hearty enough to serve as a vegetarian main course. This recipe is from The New York Times, contributed by Julia Moskin.

To Make the Croutons:

To Make the Salad: 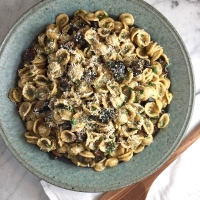 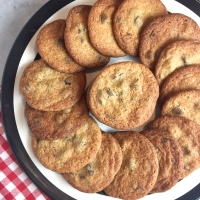 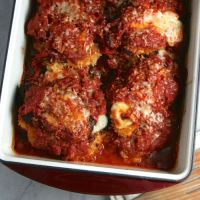